If you are travelling to the Islands as an independent traveller and enjoy walking and sightseeing, you should consider one of our customised full day tours during your visit.
Lewis and Harris is the third largest island in the British Isles and there is lots to see. If you are planning to spend a fairly short time on the island our experience and expertise can help you to get the best value out of your visit. 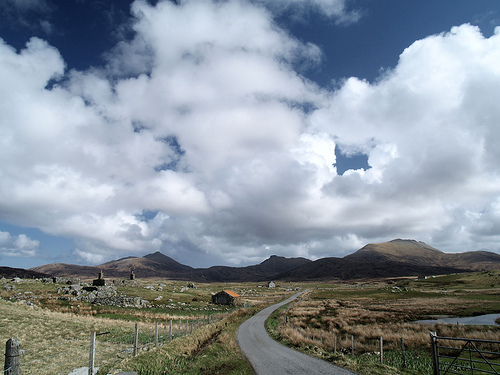 The pace of an ‘Out And About Tour’ is quite relaxed and our itineraries offer you many opportunities to explore the islands in depth and learn about the history, archaeology, wildlife and culture of the Outer Hebrides in the company of a knowledgable guide who lives on the island of Lewis.
A number of short and medium distance walks are usually included in each tour, so a moderate level of physical fitness is required. Many of our walks make use of the existing footpaths and trails around the islands and a good many of them lead to sites of historical or archaeological interest.

Lewis and Harris is the third largest island in the British Isles and has much to offer the visitor including a stunning variety of archaeological and historic sites, rugged landscapes and abundant wildlife.

If you are planning to pay a short visit to Lewis and Harris, one of our customised day tours would be the ideal way to see more of these beautiful islands.

Out And About Tours can put together itineraries that provide opportunities to see all the highlights of both islands, although we would strongly recommend that you allow at least 2-3 days for your visit in order to see all that our islands have to offer.

Depart 0900 and leave Stornoway heading northwest towards Barvas. At Barvas we head west following the circular route to Arnol Blackhouse Museum. Here there is the opportunity to visit a traditional Lewis Longhouse which was lived in until as recently as the early 1960’s. Our tour continues with a visit to the Doune Carloway Iron Age Broch. This is a fantastic example of the art of drystone walling and well worth the effort of the short but steep walk up to this imposing hill fort. From Doune Carloway we make the short drive to the crofting township of Callanish. At Callanish we visit the renowned Standing Stones and the nearby visitor centre for lunch before heading west towards the Island of Great Bernera. Great Bernera has several little crofting townships that are well worth a visit and our tour includes several short walks to places of historical and archaeological interest including the Iron Age Village at the beautiful Bostadh Sands and the restored Norse Mill at Breaclete.

Much of Bernera is very scenic and its diverse landscape is home to many species of flora and fauna including Orchids, Irises and Potentilla among the former and Otters, Grey Seals and several raptors and divers among the latter.

This tour continues with a drive out to the Uig District of Lewis and a visit to the very scenic Valtos Peninsula and Ardroil Sands. In 1831 a local crofter discovered the famous Lewis Chessmen at the Ardroil Sands following some very stormy weather in which a lot of the foreshore was disturbed.

We return to Stornoway via the Pentland Road. This single track road cuts right across the centre of Lewis and on a good day provides spectacular views of the island.

Full day tour of Broad Bay and the North of Lewis.

Departing from your accommodation in or around Stornoway at 0900 : Today we head north out of Stornoway passing through some of the areas of Lewis that have recently increased in population due in some part to their close proximity to the town and its facilities. Our route leads us northeast through the townships of Coll, Back and Gress with stunning views of the Coll Sands, Broadbay and the Eye Peninsula beyond.

We pass Gress Farm and the nearby memorial to the participants in the land struggles that affected this and many other areas of the islands during the late 19th and early 20th centuries. Beyond Gress we reach the villages of North and New Tolsta both of which are becoming popular with people relocating into the islands as they are very close in proximity to the Traigh Mhor and the Garry Sands. These are two of our most stunning east facing beaches and during our tour we take the opportunity to walk on one of them and visit Lord Leverhulmes ‘Bridge to Nowhere’.

From New Tolsta we retrace our steps to Newvalley on the outskirts of Stornoway before heading northwest across the Barvas Moor. As we drive northwest across the moor you will see many scars and ditches where the peat has been cut for using as domestic fuel. Beyond Barvas we take the opportunity to visit the largest standing stone on Lewis and Harris. This is known as the Clach an Truiseil and at 5.7 metres tall is well worth a visit. We continue north to the Butt of Lewis where the lighthouse stands proudly above some of the most spectacular cliffs on the islands. Here during the breeding season it is a paradise for the birdwatcher as there are large colonies of Fulmar, Shag, Kittiwake and several species of Gull. It is also an excellent spot for observing Grey Seal, cetaceans and the occasional Basking Shark.

A short drive from the Butt brings us within walking distance of Dun Eisdean. This was the traditional stronghold of the Morrison Clan and in recent years archaeological teams have made interesting finds on this rock of ancient habitation.

Following a visit to Port of Ness where the men of Ness traditionally sailed from to harvest the Guga, we drive south through Skigersta and Cross to return to Stornoway via the Barvas Moor.

Tour of the South of Lewis and the North Harris District.

Departing 0900 our route takes us south from Stornoway via Laxay and Balallan. The latter is the longest village in the Outer Hebrides at 3 miles from one end to the other.

At the southern end of Balallan we turn left and follow the eastern shore of Loch Erisort. Here at low tide there are opportunities to observe many species of wader and waterfowl on the extensive mudflats. We visit the townships of Cromore and Marvaig with the former providing views of St Columba’s Isle on which there are the remains of a church and the latter providing stunning views of the Minch and surrounding coastline.

From Marvaig our route takes us on to the almost deserted township of Calbost, although in recent years there has been a small rise in the population. There are some excellent photo opportunities here with the landscape being a mixture of rugged hills and croftland. The road carries on round to Gravir which is the main township in this district. Here we have the local school, church and medical practice. At Gravir we turn south and head uphill towards the townships of Lemreway and Orinsay. Both these villages cling to the rocky shoreline and fishing is still part of the lifestyle although in recent years fish farming has also been very important to the economy of this area. At Orinsay there are terrific views of the Shiant Isles with the Isle of Skye beyond.

This quiet district of Lewis is a very good area of the island for wildlife observations with otter, seals and Red and Black Throated Divers and White-tailed and Golden Eagle being just some of the species on view.

Returning to Balallan we turn south and head for the hills of North Harris. The road between Stornoway and Tarbert has been much improved in recent years and this allows the visitor to sit back and enjoy the spectacular scenery as our drive leads us past the shores of Loch Seaforth. Having crossed the boundary between Lewis and Harris we begin to ascend the Clisham and pass through the rugged hills of North Harris. Following several photo stops and a drive into the remote village of Rhenigadale, we descend towards Tarbert with stunning views across West Loch Tarbert towards the Atlantic Ocean.

From Tarbert you will be delivered back to your overnight accommodation on Lewis.

You can find out more about which cookies we are using or switch them off in settings.

This website uses cookies so that we can provide you with the best user experience possible. Cookie information is stored in your browser and performs functions such as recognising you when you return to our website and helping our team to understand which sections of the website you find most interesting and useful.

You can adjust all of your cookie settings by navigating the tabs on the left hand side.

Strictly Necessary Cookie should be enabled at all times so that we can save your preferences for cookie settings.

If you disable this cookie, we will not be able to save your preferences. This means that every time you visit this website you will need to enable or disable cookies again.